Genuine Biotech, founded in 2012 in Pingdingshan, Henan Province, is dedicated to the R&D, manufacturing and marketing of innovative drugs for the treatment of viral, oncological and cerebrovascular diseases.

Earlier this year, the market began speculating which drug would become China’s first produced oral antiviral drug for COVID-19. The three most promising candidates were Junshi Biosciences’ VV116 (Chinese: 君实生物), Genuine Biotech’s azivudine, and Kintor Pharmaceuticals’ proxalutamide (Chinese: 开拓药业). When the news broke on July 25, it was revealed that Azvudine was the first oral COVID-19 treatment developed in China.

Puzzle of the manufacturer and distributor of Azvudine

Azvudine, invented by Dr. Junbiao Chang of Zhengzhou University, was originally a small molecule oral drug for the treatment of AIDS. Azivudine is a nucleoside analogue that inhibits RNA-dependent RNA polymerase (RdRp). Since both SARS-CoV-2 and AIDS are RNA viruses, azivudine, as a “broad-spectrum RNA virus inhibitor”, can inhibit the RdRp of SARS-CoV-2, thereby preventing its replication. On August 2, Azvudine tablets entered production in Pingdingshan.

Soochow Securities believed that small molecule therapeutics for COVID-19 also has an effect on its viral mutation and has the advantages of production cost and ease of use, thus having great potential in the prevention and control of epidemics.

According to Southwest Securities, the global market size for oral COVID-19 medications is estimated to be around several billion to tens of billions of dollars. Its related market for pharmaceutical intermediates and APIs (active pharmaceutical ingredients) can reach 100 billion yuan, Soochow Securities said.

Zhongtai Securities’ analysis indicates that the market size of Azvudine tablets may reach CNY 3.8-6.25 billion, and its API (active pharmaceutical ingredient) market is valued between 0.71 and 2.14 billion CNY.

Investors have invaded this vast market. The stock price of pharmaceutical companies linked to Azvudine began to soar when Genuine Biotech, a non-listed company, signed strategic cooperation agreements with them on the production and distribution of Azvudine.

Specifically, Genuine Biotech entered into an agreement on the production and distribution of azulfidine with Xinhua Pharmaceutical (Chinese: 新华制药) (000756.SZ) in April and two more on manufacturing with a subsidiary of Ausun Pharma (Chinese:奥翔药业) (603229.SH) and CR Double-Crane (Chinese: 华润双鹤) (600062.SH) in May.

Following the announcement of these agreements, Xinhua Pharmaceutical’s share price jumped more than 500%, while Ausun Pharma’s share price doubled between the beginning of the year and the 11 may. CR Double-Crane’s share price also increased more than threefold for two months after mid-March.

In the aftermath of Azvudine’s approval, CR Double-Crane’s stock price fell to limit within half an hour of opening. Ausun Pharma hit its limit for four consecutive days, wiping out 6.6 billion yuan in total. Fosun Pharmaceuticals fell 3.11%. Only Xinhua Pharmaceuticals edged up 0.63%.

The fact that the approval of Azivudine should be good news but that the shares of these companies have since fallen is intriguing to many. In fact, Azvudine herself is still in dispute.

Chaoze Zhou, an analyst at Minsheng Securities, said the competitiveness of COVID-19 oral pills depends on their effectiveness, cost and safety. The most crucial factor is efficiency.

Dr. Chang said in an interview, “Azvudine has a clear anti-COVID-19 effect. It is effective in patients with mild and severe clinical conditions. The drug also has such characteristics as small dose, good therapeutic effect and rapid decline. in viral load for different variants of COVID-19 (Alpha, Beta, Delta, Omicron, etc.).”

However, there are still voices that question the effectiveness of Azvudine. Virologist Rongshan Chang said the Phase III clinical trial’s primary endpoint of the drug’s (Azvudine) efficacy in patients with COVID-19 was “improvement in clinical symptoms” rather than a reduction in “all-cause mortality”. That is to say, it is not the drug that could kill the COVID-19 virus, so it cannot be considered as a broad-spectrum antiviral drug. In contrast, an interim analysis of the Phase II/III study of Paxlovid published by Pfizer on its website on November 5, 2021 showed that Paxlovid reduced the risk of patient hospitalization or death by 89%.

Regarding the endpoint standard, the NMPA Center for Drug Evaluation in China announced the adjustment of criteria for clinical trials of COVID-19 antiviral drugs on August 1. The authority stated that due to the low mortality rate of patients infected with the Omicron variant, and it is difficult to observe improvements in clinical outcomes, improvement in clinical efficacy indicators could be considered as the primary efficacy endpoint, with virological indicators being the primary secondary efficacy endpoint. This fit justifies the primary endpoint of Genuine Biotech’s Phase III clinical trial.

However, Azvudine’s Phase III clinical data disclosed by the company on July 16 is far from detailed. Its specific clinical trial protocol, number and eligibility criteria for patient enrollment, dose utilization, among other details, have not been released at this time. The final results of the three registration studies of Azvudine for the treatment of COVID-19 have also not yet been published.

The controversy around the safety of Azvudine is less but not absent. Immunology specialist Yebin Zhou said that according to a July 2021 drug regulatory agency technical review report for Azvudine and the drug’s instructions, the drug showed genotoxicity and reproductive toxicity in animal studies. Potential safety issues with Azvudine therefore require special attention. By comparison, Chang thinks the dose of Azvudine is low and safe for the majority of the normal population. The tablet itself is an approved drug given for the long-term treatment of AIDS, so it should be harmless.

Although the price of Azvudine has not yet been set, its price as a drug to treat AIDS is only CNY 25.86 per milligram. Its price as COVID-19 pills is expected to be lower given the fierce competition it will face. Pfizer’s Paxlovid, temporarily added to the list of drugs covered by China’s medical insurance system, is priced at CNY 2,300 per box. Therefore, Azvudine will have a clear price advantage over imported drugs.

Destined to have the last laugh? 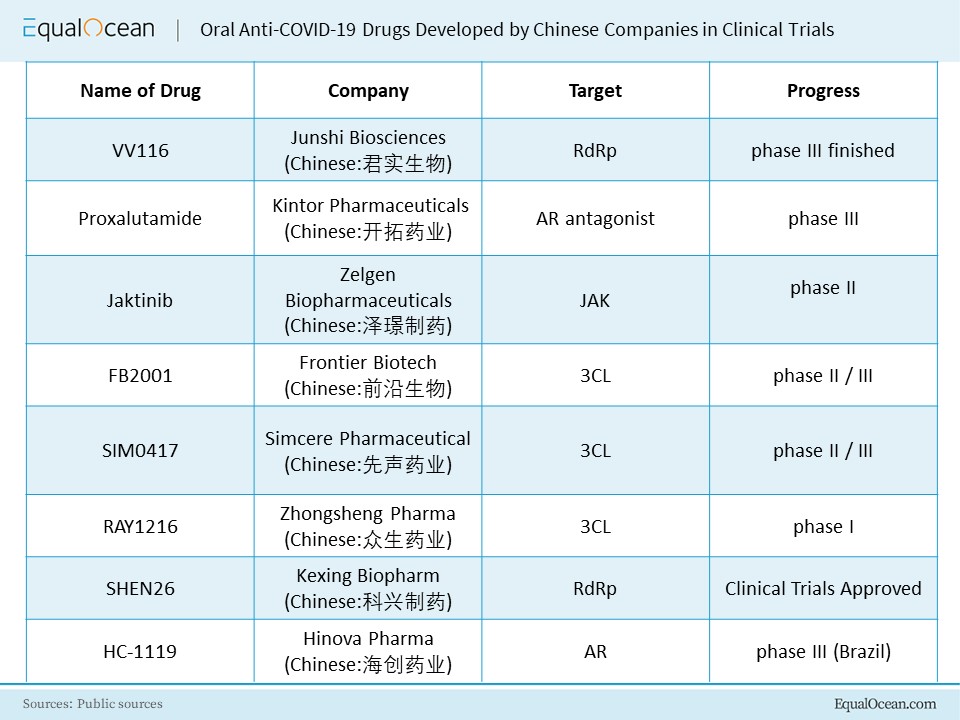 On April 6, Kintor Pharmaceuticals announced key results from the Phase III clinical trial of proxalutamide for the treatment of COVID-19 and said it will actively promote the EUA (Emergency Use Authorization) application. with drug supervisory authorities in China, the United States and other countries. On May 23, Junshi Biosciences said its registrational Phase III clinical study of VV116, an oral COVID-19 antiviral drug developed by the company, met the primary endpoint of its protocol. It will soon submit the VV116 approval application.

Azvudine might take the lead in capturing the market as the first licensed oral COVID-19 drug developed by a Chinese company, but that doesn’t mean it will maintain a market lead. MSD’s molnupiravir, the world’s first licensed small molecule oral COVID-19 antiviral drug, generated $3.2 billion in revenue in the first quarter of 2022, more than double the sales of Pfizer’s Paxlovid. However, since Molnupiravir was less effective than Paxlovid, its sales were only $1.2 billion in the second quarter, while Paxlovid contributed $8.1 billion to Pfizer’s worldwide sales during the same period. 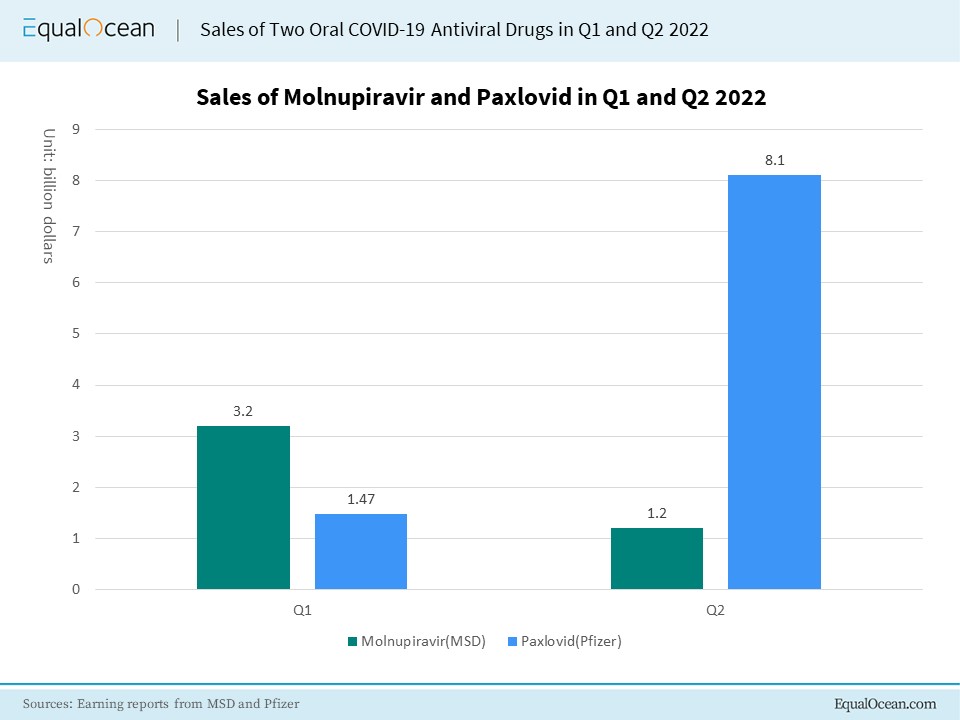 Genuine Biotech is to disclose detailed data on its oral COVID-19 antiviral drug, Azvudine, and show its effectiveness to win over the market and investors.